Located to the north east of Birmingham, Pinson is a small city of around 7,000 residents. It’s a best of both worlds place to live with its small town atmosphere and some essential shopping on the doorstep, yet there are more shops just 5 minutes drive in Chalkville, and the big city of Birmingham is only 15 miles distant.

The city was only just incorporated in 2004 yet it has a long and rich history. Pinson is actually one of the oldest communities in Alabama, settled in the early 1800s by soldiers of General Andrew Jackson following their victory at Horseshoe Bend in the War of 1812. They named it Hagood’s Crossroads originally, after one of those settlers, but renamed it Mount Pinson and then later shortened to just Pinson.

Over the past 5 years homes in Pinson had been declining in value though the last year has seen a more upward trend in the median list price. The current median list price stands at around $150,000 so real estate in Pinson is affordably priced compared to some cities in the Greater Birmingham Area. The best deals on homes in Pinson can be found in the condo and townhouse market where the median list price has actually dropped over the past year to stand around $115,000 now, however, there are very few of these types of homes on the market in Pinson. For single family homes, prices have risen by around 13% in the last year yet still offer good value at around $147,000.

Why Live in Pinson? 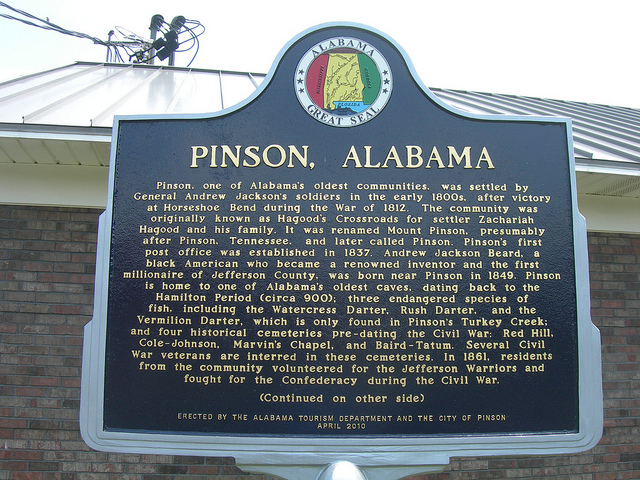 The small town feel of Pinson is going to appeal to some buyers more than others, but if you like this atmosphere and you’re looking for affordable housing then Pinson would make a great choice for families or couples. Proximity to Birmingham and other local cities means you’re never far away from facilities and services, plus it’s good news that Pinson has what you need for day to day living. The city features a very modern elementary school, Pinson Elementary, which is overseen by Jefferson County Schools. Rudd Middle and Junior High are just to the north of the city center, as is Pinson Valley High School.

You might also choose to buy a home in Pinson because it’s a safe place to live. The crime index is 13% lower than the Alabama average. See AreaVibes for more information on the livability of Pinson.

Though Pinson is only small the city does have some of the usual fast food restaurants and a couple of independent places as well, including Ken’s Hickory Pit Barbecue, and Munoz Mexican Grill. Pinson is also home to the annual Alabama Butterbean Festival if you like your beans!

So if you’re looking for the small town atmosphere to raise your kids in, or you want to relax in the countryside, homes in Pinson would be the ideal choice. See the city website for more info.

Welcome Home! With a recently converted 4th bedroom downstairs, this has all the flexibility you need for any of your space requirements. This well maintained home offers...

Don't miss your chance to own this ADORABLE 3 BD/2 BTH home located in Innsbrooke subdivision. This home has so much character and charm! The cozy Living Room features va...

***APPRAISED FOR THOUSANDS ABOVE LIST PRICE - FHA APPRAISAL ON FILE. BUYERS FINANCING FELL THROUGH. *** Termite and septic inspections have been done. Spacious Home On A ...