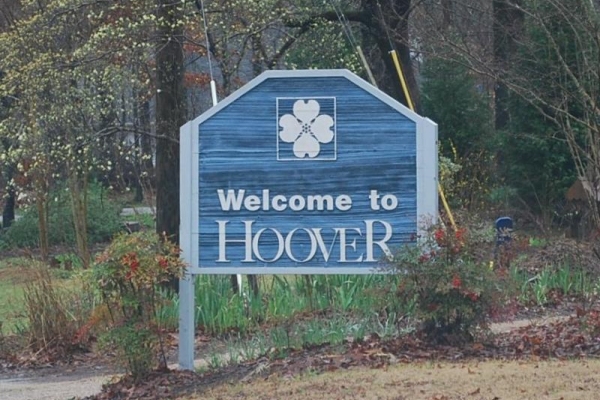 Hoover is the largest city suburb of Birmingham, home to around 84,000 people, and the city continues to attract more residents because it has so much to offer. Located along the foothills of Appalachian Mountains there is easy access to the great outdoors as well as many parks within the city itself. Shopping is renowned thanks to Riverchase Galleria, one of the largest shopping malls in the Southeastern United States, and with low crime rates, great schools, and excellent access to amenities, Hoover is the third most livable city in Alabama.

Hoover is a new city in the Greater Birmingham Area compared to many of the historic settlements close by. It was incorporated in 1967 and was named for local insurance company owner, William H. Hoover. Of course, there had been homes here for decades prior to incorporation, but once the city was incorporated additional development took place. When the Riverchase Galleria shopping center opened in 1986 it was a real boost to Hoover’s economy, and suddenly the city began to boom with new residents and new businesses setting up home in the city. The population increase really tells the story about Hoover’s success, rising from just 688 in 1970 to 39,788 in 1990, and an estimated 84,126 in 2013.

To provide homes for the many thousands of new residents coming to live in Hoover there have been numerous new subdivisions created and many new homes have been built. Even so, over the last five years inventory (the number of homes listed for sale) has been seeing a mainly downward trend, and because of this, house prices in Hoover have been rising. The median list price in October 2011 was $270,000 and in October 2014 this figure had climbed to $329,000.

For a single family home in Hoover the median list price is even higher, at close to $350,000, though the condo and townhouse sector of the market does remain affordable considering what a great place Hoover is to live. Many condos are listed around the $130,000 mark but remember that actual prices will vary depending on the specific neighborhood, size, style and condition of the property.

Why Live in Hoover?

Let’s start with the fact that AreaVibes ranks Hoover as the third most livable city in Alabama! And why is this – well, Hoover is a very family friendly place to live: it has a low crime index, 30% lower than the state average, and even lower than the national average so this is a very safe place to live. Then there’s the schools. Hoover City Schools oversees the city’s 10 elementary schools, 3 middle schools and 3 high schools, and those high schools have always had a high ranking within the entire country for their academics. An impressive 93.6% of students in Hoover complete high school. Access to amenities also gets Hoover a high ranking, with the city providing everything you need from grocery stores to restaurants, to health and entertainment.

Some of the best restaurants include J. Alexander’s with its contemporary American cuisine, the gourmet burgers of  Baha Burger, and the Cajun, Creole and seafood of Jubilee Joe’s.

As already mentioned, Hoover is also home to one of the largest shopping centers in Southeastern United States. Riverchase Galleria is a huge complex of more than 200 stores as well as offices and a hotel, and includes anchors such as JCPenney, Macys and Sears.

Another attraction that Hoover is famous for is the Ross Bridge Golf Resort and Spa which features the third-longest golf course in the world, and there are state parks right on the doorstep if you enjoy recreation as well as many city parks where you can spend time with the whole family or catch a game.

There are even more reasons to buy a home in Hoover; check out the Official Hoover Website for more information.

Be ready to enjoy the wooded peace and serenity this well-kept 2-story Riverchase home has to offer. This home has 4 bedrooms with 3 1/2 baths and sits on a large 2.16 ac...

Fabulous 3 bedroom, 1 bath home in the heart of hoover with new paint and flooring throughout, updated kitchen with stainless appliances, large family and laundry rooms, ...