It is the largest city in the state of Alabama, full of shopping, culture and entertainment, that hosts numerous festivals throughout the year. The lively city of Birmingham is home to around 212,000 people within the city itself rising to more like 750,000 in the Urban area and over 1.1 million in the Metro area. Despite the large population Birmingham is a very nice place to live – affordable housing and a low cost of living combines with great access to amenities, and head just a few miles north or south of the city to find open countryside, parks, rivers and lakes.

Birmingham is a historic city, founded and incorporated in 1871 by the Elyton Land Company. The company sold lots near where the railroads would cross, which also happened to be close to the site where iron ore, coal and limestone were all discovered. These three materials are all crucial for steel making and their existence set about firming the city’s position as a great center for industry. It seemed appropriate to name the city for the industrial city of Birmingham in England, and the founders used this as a way of advertising how Birmingham, Alabama would also become an important city for the southern United States.

In more recent years Birmingham has enjoyed a period of growth and redevelopment, especially around the downtown area. With its chic lofts and condos this is now one of the most desirable places to live in the city, particularly for young professionals, and residents enjoy easy access to downtown’s new restaurants, bars and entertainment.

If we take a look at the real estate market across the whole of Birmingham, the city offers very affordable housing with many homes listed well below the national average. Of course, the actual list price of homes in Birmingham will vary greatly depending on the neighborhood and type and size of homes for sale, but if we take the median it currently stands at around $120,000. Although very affordable this is among the highest it has been over the past 5 years as demand for homes in Birmingham is on the increase, while inventory (the number of homes listed for sale) has been steadily decreasing during this period.

Why Live in Birmingham?

Downtown Birmingham is a thriving neighborhood thanks to the redevelopment that’s taken place here over recent years. A decade or so ago it was a run-down area that had nothing going on once all the office workers had left for the night, but now it’s a different story. Historic theatres have been brought back to life and there is always something going on at one of the city’s numerous cultural and entertainment venues including the Birmingham-Jefferson Convention Complex.

There are excellent museums in Birmingham too, the largest of which is the Birmingham Museum of Art while other significant museums include Birmingham Civil Rights Institute and the Southern Museum of Flight. The Sloss Furnaces National Historic Landmark also has museum exhibits.

Bars and restaurants are abundant in Birmingham, from fast food eateries to fine dining, like the renowned Highlands Bar and Grill, the eclectic cuisine of Chez Fonfon, and the upscale atmosphere of Bottega Restaurant.

If you’re considering buying a home in Birmingham for your family, the Birmingham area has many excellent schools and is often reputed to have some of the best high schools, colleges and universities in Alabama. The Birmingham City Schools System operates the schools in the city, and according to AreaVibes just under 80% of students complete high school in the city.

Low cost of living, affordable housing, great amenities, and good schools all add up to making Birmingham a great place to live, whether you’re young and single or moving here with school-aged children. See the Official Website for the City of Birmingham for more information on living in the city.

Great investment property or property for first time home owner. Conveniently located to shopping, schools and the interstate, this 2-bedroom brick home with a large base...

PRIVACY AND LOTS OF SPACE best describes this beautiful 4 bedroom 2 full bath house . hard wood floors through out , Fresh interior paint as of January 2022. This propert... 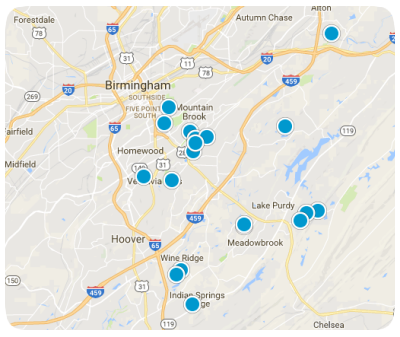